The first Brethren moved to the Eastern Shore in 1869 and to Talbot County about 1875. Initially services and Sunday school were held in a schoolhouse near Easton. Some names of the early Brethren who came were Kline, Rittenhouse, Wingard, and Longenecker. They came from Pennsylvania, Ohio, and western Maryland. The farming conditions seemed attractive to these early Brethren.

In 1880, Union Meeting House ― frequently called “Round Top” — was built by four denominations (Methodist, Lutheran, Swedenborg, and Church of the Brethren) who alternately held services every fourth Sunday. The building was also called the Peachblossom Meeting House because of the Peachblossom Creek nearby, and Peachblossom was the name of the congregation, as well. At some later date, but still early in the history of the church, the Brethren alone used the building and became the sole owner.

Occasionally preachers came from western Maryland and eastern Pennsylvania to preach. The Brethren church formally organized in 1881 and for 17 years was under the District Mission Board of Pennsylvania.

Other Brethren who came to the Shore early in the history of the church and who served as ministers were A.A. Oberlin, Caleb Secrist, James Hutchison, and Isaac Barto. Barto served as elder from 1898 to 1901. In 1898 the congregation became self-supporting.

In 1893 the Fairview building was constructed near Cordova, Maryland, because the membership was increasing in that area, and it was impractical for members living there to travel to Easton by horse and buggy. However, Easton and Fairview remained as one congregation until Easton decided to enter into a full-time salaried ministry in 1955.

Because of the growing membership, Easton purchased a larger building on Bay Street in the town of Easton in 1902. In 1918 Barry T. Fox was called to serve as the congregation’s first pastor. This was still in the time of the free (non-salaried) ministry. Brother Fox was assisted by ministers serving both Easton and Fairview. These ministers were Albert Fike, William Sanger, Harry Ziegler, Norman Warner, and Joseph Rittenhouse. Ministers called later included Paul Fike, Russell Beahm, Dwight Miller, and Emerson Fike.

In 1924 the Helping Hand Class of the congregation started a building fund for a new building, and in 1930 the first payment was made on a lot on the corner of South Harrison and Stewart streets in Easton. A new church building was begun there in 1949 and dedicated in 1950, and it remains in use by the congregation today. The church continues to care for the historic Round Top meeting house and uses it for special services. 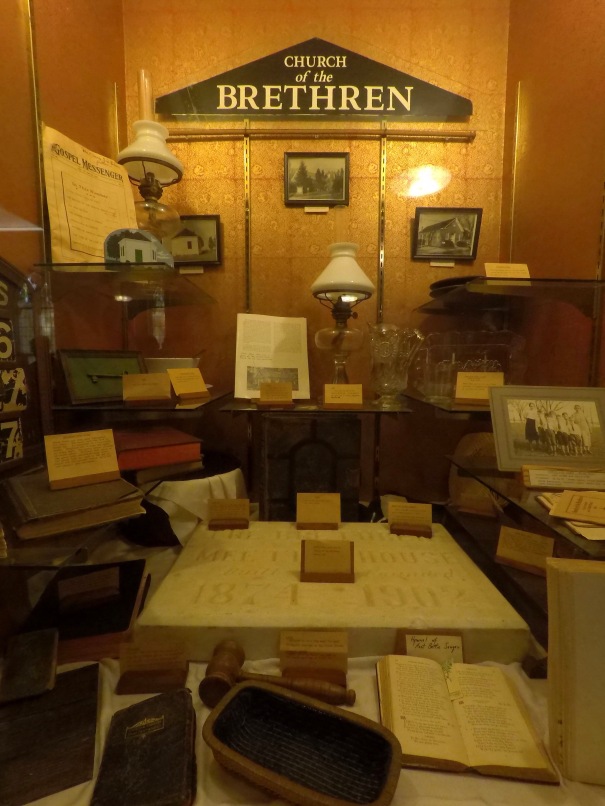 Historical display at Easton Church of the Brethren